You may remember a post I published back in May about my very sick cat.

Well its been six months since the vestibular disease and although the little monkey is better the only issue is that the illness affected his confidence, every time he jumps into the lane I have to open the gate to let him in – I am glad that is the only issue as it was very difficult caring for a cat that couldn’t even walk.

Anyway, here he is out and about in the frosty November air enjoying the sunshine.

This is Bodhi, my three year old British short hair. Nearly three weeks ago in the matter of a few hours he became incredibly ill.

We couldn’t find him anywhere, and to begin with I didn’t really worry – I thought he was probably snuggled in a neighbours house, but as time went on and he still didn’t turn up I became very worried that something had happened to him. After scouring the streets and lanes we were at a loss, where could he have been. Then when sat in the garden waiting, I heard the familiar sound of the bell on his collar, but it wasn’t coming from the other gardens, it was coming from the shrubs. I peeked in and found him looking very distressed, his head was tilting, he couldn’t move and his eyes were very odd. I had no idea how long he had been there, and was concerned that he was getting cold so pushed past the rose bush (which scratched me to ribbons) and picked him up, something he didn’t really like but I had to.

When we got him inside, we could then see how not right he was, his eyes were really wobbling back and fore, something I’ve learned from the internet is called Nystagmus, I feared that he had a brain injury as I had never seen these symptoms before in a cat, so we got straight on the phone to our vets’ out of hours service. As we hadn’t seen what had happened, it could have been anything – infection, toxic plant, fight with a dog, fall off a roof, hit by a car, tumour, we really had no idea. The vets seemed quite concerned and had obviously never seen these symptoms either, at that point he was given a 50/50 chance of survival, this scared me – he’s a three year old!  She kept him in for the night to do a toxin screen, put him on a drip and keep an eye on it, she rang us later that evening to tell us that his bloods were fine and his major organs all working normally (so no toxins). The following morning we had some bad news, he hadn’t improved over night, in fact his pupil response had deteriorated – her advice was to take him to a small animal hospital for specialist scans, the nearest place being 88 miles away in the neighbouring country of England, so armed with a sat nav we traveled all the way to get him looked at. This seems like a simple thing, but Bodhi hates traveling and mews for the whole journey to the vets, which is only two miles away – this is 88 miles… The journey was horrendous, torrential rain on the motorways, reduced visibility, obviously upset cat, it took forever to get there.

When we got there they were very helpful, they had a theory that Bodhi had an issue involving his vestibular system, but were concerned that it may be something on the brain affecting it, so urged us to allow them to scan him to rule that out. They were going to photograph him and keep fluids as he was a very unusual case, and as it is a teaching animal hospital they could learn from it. As he’s insured we are lucky that anything he needs medically can be covered, I’m very glad of that. They promised to ring me with an update the following day.

We left Bodhi in their capable hands, but as I left I got incredibly sad, it felt like I wouldn’t see him again, all the talk of brain tumours and injury had got me very scared.

A day later she rang to let us know that the MRI had come back clear and so had his spinal fluid, they were diagnosing him with Idiopathic Vestibular Disorder,  caused by the abnormal function in the brain or ear nerves which make up the vestibular system, at this point in time Vestibular disease seems to be a mystery to most people, especially me – so I went online and found lots of help and advice. From the write ups Bodhi had a text book case of Idiopathic vestibular disease, this helped to relax me slightly, as I could see that he would get better.

For the following couple of days they rang us on a daily basis to let us know how he was, he was showing signs of getting better and on the Thursday we were told that Friday they were releasing him to us, I was delighted!

The trip to Langford Small animal hospital seemed so much quicker the second time around, when I saw him he was so much better than he had been – now he was walking around and falling against things, his head still tilted to the left but that may resolve over time, and if it doesn’t cats just re-adjust to it. He seemed happy to see us, and I couldn’t concentrate to listen fully to the advice I had been given – I was so happy to see him moving about with no nystagmus. He would need extra help for a while, but he was on the mend. He didn’t need any medication as it gets better with time.

The majority of the mending took place in the first week, he got stronger, his eyes started reacting properly again, although not fully, his little personality re-appeared (his cheekiness) and he started to eat properly. Within the second week he was re-introduced to the girl cats, and this was quite tricky as he had been away for five days and had the smell of vets on him, Bella wasn’t fussy and kept hissing at him, Polly wanted to bother but was unsure. I have to keep a close eye on him as he still can’t jump and the world to a cat without jumping skills is a very dangerous place, as I don’t want him falling down and hitting his head or hurting a limb.
I took him for a supervised wander in the garden earlier as he was getting very frustrated with not being able to go outside, he was OK for a bit but then tried to free climb over the stone wall and I can’t let him wander to anywhere he can’t jump out of, so back in we went… something he disagreed with… Loudly. Bella has stopped hissing and they are touching noses and sniffing again.
Anyway that’s where we are right now, he’s getting better slowly and hopefully the head tilt will go, but if it doesn’t it will just add to his cuteness… it’s a matter of time.
I can’t thank the services at my local vets and the animal hospital enough though, it could have been something very horrid but their thorough investigation got to the bottom of it and I’m very grateful. 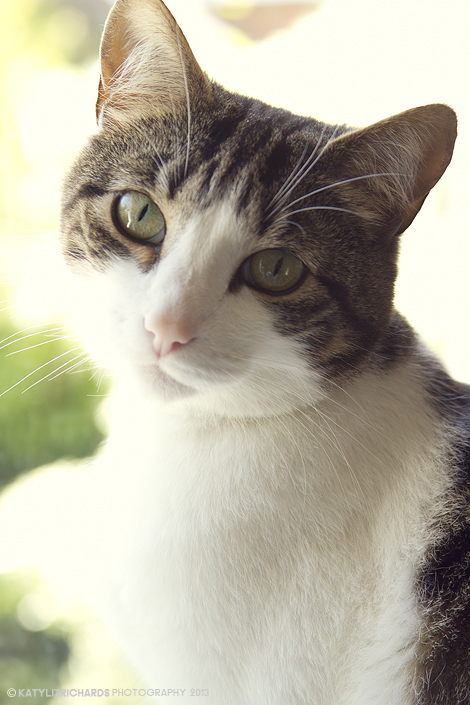 As you can see Bodhi is fed up of being photographed, but I think its useful to track his progress.